Part of my masters thesis in graduate school involved 33 owls. They were featured in a large photograph that was displayed in the museum of the the Pennsylvania Academy of Fine Art and after i graduated with my masters in 2010 I had moved the owls with me from place to place Philadelphia. When I moved to Berlin Germany the owls lived with my parents in Lancaster Pennsylvania and moved with them to Indianapolis Indiana. In 2014 I had moved back to Philadelphia Pennsylvania and 30 of the 33 owls lived in the basement of the Cedar house (X93X) and three owls lived in my studio on the 3rd floor. Starting in 2015-2016 i started giving owls to different venues and promoters in the Philadelphia as gifts when I attended events and when I didn’t give an owl as a gift I would give a fresh pineapple from a West Philadelphia fruit truck. I remember distinctly giving owls to WKDU, the Mothership, The Eris Temple, 52hz, Beaumont Wherehouse, Fort Tinder, Soundhole, Lava space, Berks warehouse, Ahimsa house, The Farm, A-Space, Satellite cafe, Spruce Caboose, Fuime, The Vat, Lacquer, Hot yoga Philadelphia, Inciting hq, Kungfu Necktie (upstairs), just to name a handful and many more places that were hosting events. One more owl with a broken beak was placed on the traffic box on the northwest corner of 49th and Catherine Street in front of the Bar(n), which was taken by one of the employees of Dock Street who had just gotten off shift to drink at the bar.

The owls themselves have many different meanings to me, first of which is that the goddess Athena’s friend and sidekick is “Athene Noctua” the owl. As a child in Catasauqua Pennsylvania I made a pledge to the universe to seek wisdom in life so Athena and the owl became later symbols of this youthful pledge. My father had gotten his masters and doctorate in cultural studies and ethnology from Temple University, had taught there as well and Temples mascot is the Owl that accompanies the Temple of Athena that is on their crest.

Later as a late teenager in the 90’s in Chicago Illinois I had watched the TV, “Twin Peaks” and I remember the character “the log lady” saying the infamous line “the owls are not what they seem”, so the owl becomes a meme and a bit of a jest. Over all the owl became a symbol of knowledge, wisdom alluding to a strong female presence watching over me and i tried to take it back from the negative context that the owl has in our culture.

Actually the owl itself has a kinder memory in my childhood as being a character in “Winnie the Pooh”. The owl as a night creature is also often sees what most can not see at night so to me it becomes a symbol in night parties of the techno world of night time raves and parties. I always felt if there was an owl in the room at a show or party then I felt safe as if the goddess Athena was watching over me and protecting me from negative energy and negative people.

The last aspect of the owl is as an object to scare away squirrels. When I lived in the Cedar house in West Philadelphia from 2014-2018 squirrels had broken in and made home in the wall of my studio and bedroom. They made a lot of noise often between the times of 5-6 AM until 8pm everyday. I started to attempt to plug up the holes they where getting the wall from the outside by making holes in the drywall of the studio to reach the outer holes. This caused at one time a squirrel to enter the studio which I managed to corner and to catch wearing a work glove on my hand and the squirrel was released unharmed outside. Using peanut butter and a squirrel trap borrowed from a neighbor in a two week time frame I had caught seven squirrels from the roof of the Cedar house. We released the squirrels out in Bartrams Gardens which was far enough away that they didn’t cross back to Cedar Park. In the end I don’t think the owls worked in keeping the squirrels away. 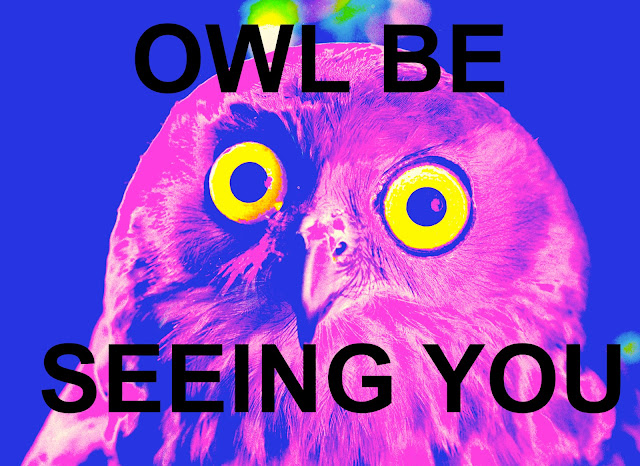